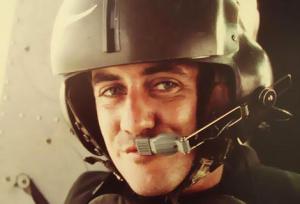 What is it about black and white photographs that envelopes them in the mists of time?  Now it seems, colour in television and in photography gives a clearer, if not always appealing, view of our world and our wars.

In black and white, as if bereav’d of light

(with apologies to William Blake)

What is it about black and white photographs that envelopes them in the mists of time? Why do the subjects in the frame seem to be locked in the distant past? The stark tones of black and white film are very effective in keeping us at arm’s length from history.  In contrast to the emotional detachment of monochrome, colour images have the potential to connect with us in a deeply visceral way.  This is especially so of wartime images of service personnel, when captured impromptu, by a friend.

In 2007, photographs released with the return home of Australia’s last soldier to be listed as MIA (Missing in Action) were an extraordinarily powerful example of the impact of colour.  Lance Corporal John Francis Gillespie had been killed during operations in Vietnam in 1971.  Bearing in mind that most of Australia’s Vietnam veterans are now in their sixties and seventies, the colour image of John Gillespie at 24 years of age that appeared in the Age newspaper at the time, must have been treasured by his family.  Except for the sixties-vintage flight helmet, the photo could be one of a modern Australian crewman from more recent conflicts such as Iraq, Timor or Afghanistan.  In isolation, it’s probable that only those vets and perhaps regular pilots who would immediately recognise the age of the equipment in the image and it’s meaning.

What makes the image so potent, so striking, is its apparent sense of the moment, the now!  The photo telescopes a young serviceman from his “present” in 1971, into our present.  The picture is perhaps a little fuzzy in spots.  But look at the eyes, the small reflections sharply in focus, the laugh lines and the hint of an amused smile.  The contrast with the Lance Corporal Gillespie’s impersonal military ID photo, published in black and white, was striking.  Typical of official passport-sized images so often displayed in military obituaries, it provided scant information. In John Gillespie’s, he is five foot eight and a half inches tall, has a strong chin, classic military haircut, and a sleepy left eye.  These, of course, were tangible descriptors perhaps suited to bureaucratic files. The uninspiring image could have been anywhere from six to sixty years old.  Grainy black and white photos do that.

To the ordinary viewer today, the colour close-up of John Gillespie has a lightness, and yes, even a hint of playfulness about it that belies the omnipresence of war.  The proximity to the lens, and John’s comfort with it, suggests a chance snapshot by a friend – perhaps another crew member.  We are in no doubt of the soldier’s preparedness for battle.  A firmly strapped helmet and behind, the rivets in the metallic bulkhead put us in the chopper, perhaps about to head out on an “op” as indeed he was.

The colour image has a personality that sets it apart from the works of traditional war photographers.  Official pictures rarely do justice as portraiture, and in the case of fallen soldiers, asking a bereaved family to pick one image that encompasses a person’s life and who they were, is nigh impossible.  In a sad coincidence, the remains of John Gillespie were returned at very nearly the same time as the body of Private Luke Worsley (4RAR), killed in Afghanistan.  At his funeral, Luke’s brother-in-law Tim Shuttleworth, put it to journalists, “that it was difficult to paint a portrait of a man while still mourning his loss”.  In a sense, official photographs are too distant to be representative of the soldier as a person, and those by friends and family are perhaps too close – at first.

It is perhaps one of those cruel ironies of war, that this nation’s 40th fatality in the Afghan conflict, was recorded just recently.  Corporal Cameron Baird (2nd Commando Reg.) was killed in June of this year.  Previously, the five-tour veteran had been awarded the Medal for Gallantry for courage under fire while attempting to save the life of a fatally wounded, Pvt Luke Worsely.

Widely acclaimed war photographers such as Frank Hurley during the First World War and Damien Parer in the Second, focussed on illustrating the collective military experience of battle. Hurley’s apocalyptic images from the Western Front (c. 1918) impressed some and but horrified others. Parer took many images of the often battle-fatigued soldier, although they still emphasised the broader war experience.  One of his most famous images is of Sergeant Gordon Ayre assisting the wounded Private William Johnson across a swollen river to a field aid station near Salamaua, New Guinea (1943).

Despite their obvious aesthetic content, these powerful war photographs were nonetheless explicitly for official records.  Of necessity, they were also captured in black and white.  Over the years, the works of these legendary photographers may have achieved icon status. But the images themselves are firmly locked in a time more familiar to our grandparents and their parents, than to most of us. History, for the first half of the twentieth century at least, was largely recorded in black and white.  Vietnam changed all that.  Colour in television and in photography gave a clearer, if not always appealing, view of our world and our wars.

This exceptional photograph of medical orderly John Gillespie is one of those rare images that tells of the man and the moment. It manages to make that instant in time relevant for us today, especially with the return of his remains to Australian soil. To paraphrase David Dare Parker, Australia’s only officially-appointed war photographer since the Second World War – there is no ego in this image, it’s not about the photographer, it’s about the man – and it brings Lance Corporal John Gillespie’s story out into the light after 36 years.